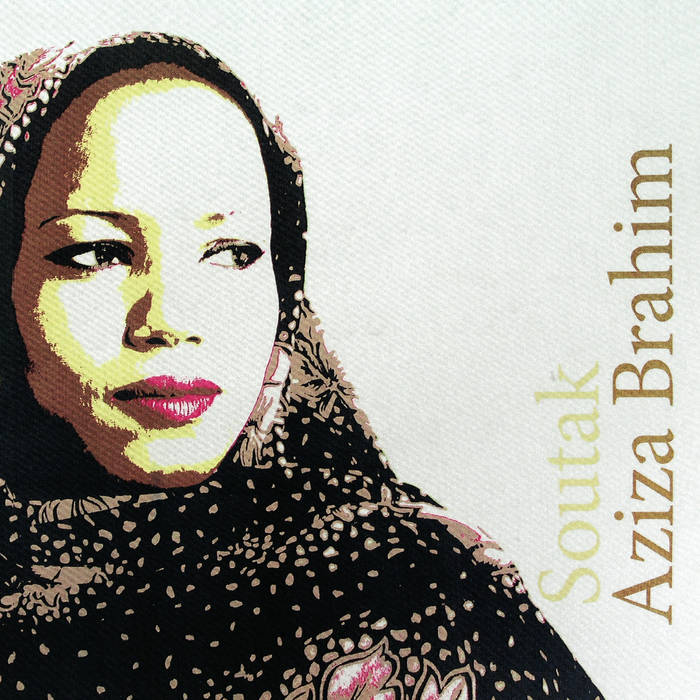 Robert Bloemkolk There's no language barrier. No cutural divide. The sound of her voice reaches your heart almost instantly. While the music moves your body into a Saharan swing of eternal shifting sand. Favorite track: Espejismos.

Kyle Dosier I am transported, heart first, into Aziza Brahim's storied life from the moment she opens her voice and plays the first Saharan tabal notes. This is unlike any story ever told, and to follow her is to include wonderful musicians and musical influences from a unique, worldly journey. Favorite track: Lagi.

Carsten Pieper Best to quote the record label (the formidable Glitterbeat): "The music on Soutak is a powerful and nuanced mixture of musical cultures and features Malian, Spanish, Cuban and contemporary Anglo-European motifs all held together by Aziza’s deeply rooted knowledge of traditional Saharawi song and sound."
Julud is a fantastic example for how a song can sounds sad and be uplifting at the same time! Favorite track: Julud.

Voiced with deep passion and grace, Aziza Brahim's music adeptly travels the expanse between her Western Saharan roots and Barcelona, the European cosmopolis where she now lives. Aziza is both a contemporary sonic poet and a prominent and eloquent spokesperson for the Saharawi people and their ongoing struggle for recognition and justice.

Born and raised in the Saharawi refugee camps lining the frontier between Algeria and Western Sahara, Aziza’s life has been marked by both daunting hardship and inspired will. Fleeing from these camps and the regime of political oppression that followed Morocco’s 1975 invasion of Western Sahara, as a young teenager Aziza travelled to Cuba for her secondary school studies. There she experienced first hand the deep Cuban economic crisis of the 1990’s and the subsequent denial of her request to pursue a university degree in music.

Music had been Aziza’s passion since she was a small girl and despite this setback she returned to the Saharawi camps in Algeria and began singing and playing in different musical ensembles, a process that continued when she moved to Spain in the year 2000. There she founded the eclectic Saharawi/Spanish band Gulili Mankoo with whom she released two acclaimed self-produced recordings: the EP “Mi Canto” (2008) and an album “Mabruk” (2012) both on Reaktion, a French label specializing in Saharan music. In the last years Aziza has performed extensively appearing at major festivals and venues including WOMAD Cáceres (2012) and Queen Elizabeth Hall in London (2009).

Aziza’s new album Soutak (“Your Voice”), her debut for the Glitterbeat label, is her first recording to predominantly focus on the cadence of her majestic voice and the soulful critique of her lyrics. The album was produced by Chris Eckman (Tamikrest, Ben Zabo, Dirtmusic) and was recorded live and direct in Barcelona in June of 2013.

In the liner notes to the album Aziza describes her vision for Soutak:

“Feeling the need to make an acoustic record, I imagined a somewhat modest musical outline, which would not involve too many instruments and in which the voices would take the expressive emotional lead. I wanted to further explore the range of possibilities found in the Haul, the Saharawi’s traditional rhythmic sources, played on the tabal and a source of inspiration for the Desert Blues.”

The music on Soutak is a powerful and nuanced mixture of musical cultures and features Malian, Spanish, Cuban and contemporary Anglo-European motifs all held together by Aziza’s deeply rooted knowledge of traditional Saharawi song and sound.

Throughout Soutak, the band frames Aziza’s voice with dignified restraint and leaves unvarnished space for her lyrics, lyrics which range from the sharply political “Gdeim Izik” (named after the “Camp of Dignity” crushed by the Moroccan-backed authorities) to the whispered enigmas of “La Palabra/The Word” (“Cradled by the wind it left/ it went around the world and returned/ and there beyond the word was heard”)

The song “Julud,” dedicated to Aziza’s mother, is possibly the most emblematic song on the album combining intimate and stark desert poetry with an unyielding faith in the Saharawi political struggle:

You are like the night and the stars / Your voice goes beyond the top of the clouds / You are the smiling breeze of today / You are an example of humanity and of fight / Resist, immortal, resist.

Though the songs on Soutak can be unsparing in their details of oppression, there is more often than not a “smiling breeze” to be found. Aziza’s essential voice, headstrong commitment and subtly inventive music are that breeze.

With Soutak Aziza Brahim has delivered an empowered flight to freedom; an alternative world where hope is imminent and dancing is justified.

Bandcamp Daily  your guide to the world of Bandcamp