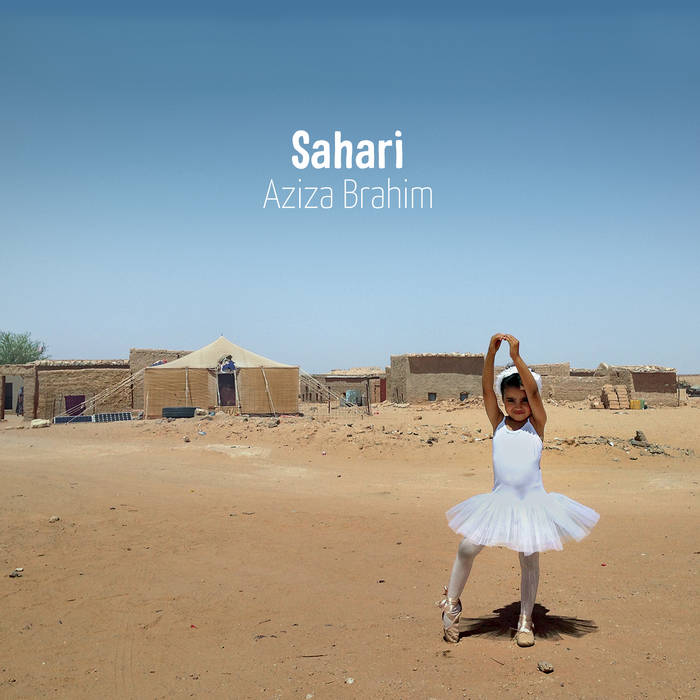 Cosmographer THAT VOICE, oh my God. This record is beautifully performed and recorded; when it rocks, it ROCKS, and it manages to never lose candor. Aziza is simply a wonderful artist that more people should know about. Favorite track: Sahari.

Jonathan Richards Aziza has done it again! I cannot stop listening. What a gem! Thank you for your great gifts to the world.

On the front cover of Aziza Brahim’s new album, Sahari, a young girl poses in ballet shoes and a glistening white tutu. It’s a common childhood scene, but it’s tipped upside down. She’s not privileged and the backdrop isn’t a comfortable suburban home. She’s an exile, living nowhere near her homeland, and behind her stand the tents and buildings of a refugee camp. There’s a desert on the ground and a burning sky above. Yet even in this bleakness, she has optimism. She believes in a better future.

The music Aziza Brahim makes reflects both the sorrow and the hope of these people. She grew up in one of those camps in the Algerian desert, along with thousands of other Saharwai who were removed from their homes in the Western Sahara. The refugee camp was the place that formed her. It lives in her every heartbeat.

Her grandmother was a famous Saharwai poet, her mother well-known as a vocalist, and they passed their strength and fearlessness to her. Now, as one of North African most lauded singers, Brahim uses her position to make the plight of her people known – and of the refugees across the world who have no choice but to exist in the camps. Sahari is for them as much as it’s for her own family.

“My purpose is to denounce the extreme living conditions there and the great injustice that prevents Saharawi refugees from returning to their home,” Brahim says. “I try to capture the feeling of longing that my elders express for the land that was taken away and for their past life in their country. But I know it’s not just us; there are currently 70 million people forcibly displaced in the world. 26 million of them are refugees.”
The political remains intensely personal for Brahim. She lives in exile, in Spain, and the music for Sahari – her third album for Glitterbeat - was written there. And while her songs remain grounded in her homeland, her gaze is increasingly global. To achieve that, Brahim worked with the acclaimed Spanish artist Amparo Sánchez of the band Amparanoia on the album’s pre-production, and the collaboration has made a transformative impact on the music. The focus is broader, with programming and keyboards a vital part of the new sound.
“Amparo is an artist I’ve always admired,” Brahim observes. “She suggested introducing electronics, and that meant recording in a different way. Before, we’d record everything live. This time we all worked in different studios then put the pieces together. I produced the album, the first time I’ve done that since Mabruk in 2012, and it was a very difficult job, a very interesting challenge: to work in a new way yet make your own songs sound exactly as you want.”

That difference in approach even extends to the very root of Brahim’s music, the tabal drum that’s been the heart of Saharawi music for centuries.

“It’s the main instrument of our tradition,” she agrees. “I wanted a dialogue between traditional and electronic percussion, to have it interacting with the programming. I actually recorded two different tabal to play with the different desert sounds; you can hear that in "Four Proverbs.” For Sahari, I wanted to find that balance between the past and the present, between African and European music and to reach as many people as possible.”

The process was made smoother by having a sympathetic band who’ve been with her for years. All the members played a part in framing the new material.

“Initially I put together the structure of the songs on the demos with the help of my bassist, Guillem Aguilar,” Brahim explains. “After that, I worked out most of the arrangements and the sound of the guitars with Ignasi Cussó. That was the key; for me, guitars and vocals were the main elements. Aleix Tobias listened very thoughtfully before coming up with a number of drum and percussion parts. Finally, Amparo Sánchez supervised the electronic part, all the keyboards and the saxes.”

When Brahim began as a composer, her work reflected her own reality, growing up in the far, rocky desert known as the hamada. These days she’s become a voice for refugees across the globe, and what she sees every day on the news has inevitably affected her writing.
“The normalisation of injustice is something that the Saharawis know well,” she observes. “By addressing that in the songs, I’m trying to fight against the prejudices some people have. We all see tragic news caused by the policies of reactionary governments. Of course that’s influenced the writing of the songs on this new album. How could it not?”
And one of the most powerful pieces on Sahari is a cry for home from someone caught in the flux of exile. “Ard El Hub,” Brahim explains, speaks of “the impossibility of returning to the homeland for us. The lyrics of the song are by Zaim Alal, a great Saharawi poet. I saw him the last time I was in the refugee camps, and he wrote this poem for me to sing.”

My homeland, the land of love / The cradle of my childhood / To you the longings rise / That embrace the sky.

Bandcamp Daily  your guide to the world of Bandcamp